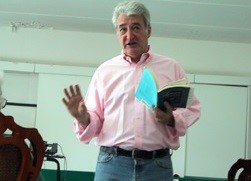 Inferno is the first part of Dante Alighieri's 14th-century epic poem Divine Comedy. It is followed by Purgatorio and Paradiso. Dante’s Inferno is viewed as both an expression of the medieval intellect and as a cornerstone of the European literary tradition.

The Inferno tells the journey of Dante through Hell, guided by the ancient Roman poet  Virgil. In the poem, Hell is depicted as nine concentric circles of suffering located within the Earth; it is the "realm ... of those who have rejected spiritual values by yielding to bestial appetites or violence, or by perverting their human intellect to fraud or malice against their fellowmen."

Professor Anthony Oldcorn was born in Lancashire, England.  He studied at Worcester College, Oxford before moving to America, where he has taught in leading universities for more than fifty years.  At Brown University, he was Chairman of the Italian Studies Department and his research interests extended from Dante to the 20th century. He has translated many Italian authors into English and remains a scholar on Dante’s works.